Be immersed in the repertoire of Elliot Gyger, George Crumb, Somei Satoh, Hildegard von Bingen and Robert Schumann and discover the multilayered and multidimensional timelessness of the celestial world.  A shimmering constellation of music, which invites audiences to reach for the stars and celebrate creativity in all its forms.

Elliott Gyger
The Pleiades at Midnight

Somei Satoh
The Heavenly Spheres Are Illuminated by Lights

“Vivien Hamilton is the star of the show. Words are subtly coloured… an approach which is in sympathy with the music.” John Weretka

Scottish born mezzo-soprano Vivien Hamilton has been active on the professional platform in Australia for 40 years. As a young singer she studied with Molly McGurk (University of Western Australia) and contemporary music in London with English soprano Jane Manning. Vivien sang with Six Degrees in their “Generations” project for the Metropolis Festival at the Melbourne Recital Centre in 2019. She has enjoyed other such collaborations with pianist Len Vorster, e21 (Scelsi, Nørgard, Steve Reich’s “Tehellim”), Chicago-based group Eighth Blackbird in Steve Reich’s “Music for 18 Musicians,” as well as with Melbourne-based group, Icon Trio. Vivien is well known to early music audiences for her many projects of intimate chamber music. These range from programs with lute/theorbo (Rosemary Hodgson, Samantha Cohen), viols (Consortium, Concert Eclectus, Continuo Collective) to singing in ensemble with vocal groups (e21, The Hilliard Ensemble), and instrumental ensembles (e.g. Auncient Hermony auncienthermony.com, La Compania, Ludovico’s Band). She enjoyed success as ‘Mrs Andersson’ on the stage with the Melbourne Theatre Company in Sondheim’s “A Little Night Music.” Vivien has taught at tertiary level for several universities over the past 30 years. She was director of Early Voices (Early Music Studio) University of Melbourne from 2005 to 2015. Vivien’s recordings include Arvo Pärt Passio (ECM/Hilliard Ensemble), Burns and Beyond: Songs of Robert Burns (Move); Classical Destinations DVD (host: Aled Jones), John Maxwell Geddes’ A Castle Mills Suite film (Live Music Now Scotland).

Eliza Shephard graduated from Australian National University with a Bachelor of Music (First Class Honours) in Flute Performance studying under Virginia Taylor, and has completed her Master of Music Research through Griffith University Conservatorium looking at the Glissando Headjoint, a mechanism designed to bend sounds and expand upon the pitch spectrum of the flute. Eliza has studied and performed in Canada and USA and has completed three years in the Professional Performance Program at Australian National Academy of Music. During her time at ANAM, Eliza received the Outstanding Program in a Solo Recital award, the ANAM Volunteer’s Prize, the Ursula Hoff Institute Prize for Most Outstanding Performance in a Solo Recital, and the Director’s Prize. Eliza was awarded the International Woodwind Player Award at the Gisborne International Music Competition, and has guested with Plexus Collective, Arcadia Winds, Rubiks, and Elision Ensemble. She is paving her way as a young performer in Australia, and has a passion for collaborating with other musicians and artists, and designing striking performances that are memorable and daring. Described as ‘fiery’, Eliza has a background in theatre and dance, and enjoys drawing on these skills within her performances. She also tours around Australia sharing her passion for contemporary music through her flute program ‘The Extended Flute’, where she aims to introduce extended techniques and their many benefits to the young flute players of Australia.

Hamish Upton is a percussionist who thrives as a collaborator, champion of contemporary music, and educator. He holds a Master of Music Research from Griffith University focusing on the use of laptop-based sound technology as an enhancement to solo percussion performance. He studied at the Australian National Academy of Music where he won multiple awards for his curation and performance of contemporary art music, and prior to this was supported with full tuition and board for four years of study at the Yong Siew Toh Conservatory at the National University of Singapore. Hamish was a performer in Semaphore, Kate Neal’s APRA award winning interdisciplinary work (2015). Hamish performs with Speak Percussion, and has previously worked with BOLT ensemble, Elision, and was a performer at Bendigo International Festival of Exploratory Music in 2016, 2017 and 2019. Hamish is a co-director of Ossicle Duo, with trombonist Benjamin Anderson. Ossicle Duo won the contemporary masters prize for their performance of Mauricio Kagel’s L’art Bruit in 2019 and the duo are 2022 Local Heroes at the Melbourne Recital Centre. 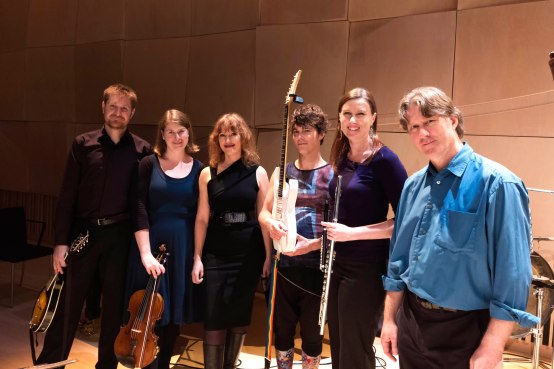